Finike provides easy access to many ruins and beaches due to its central location. We wanted to introduce some of the closest and most known routes to Finike to our guests. Besides these routes, it is possible to reach a wide variety of destinations such as Hoyran, Sura, Kyaneai, Papaz Cove, Karaöz and Mavikent. Detailed information about the trip routes is shared with the guests who wish to visit them. 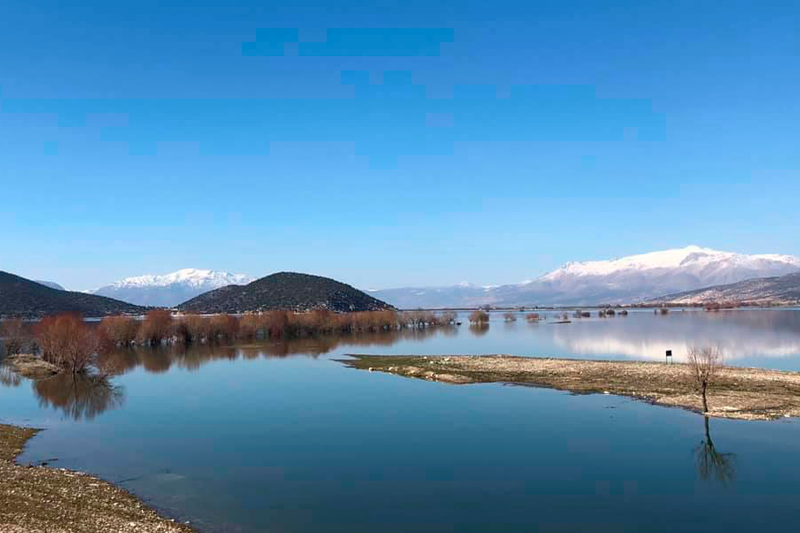 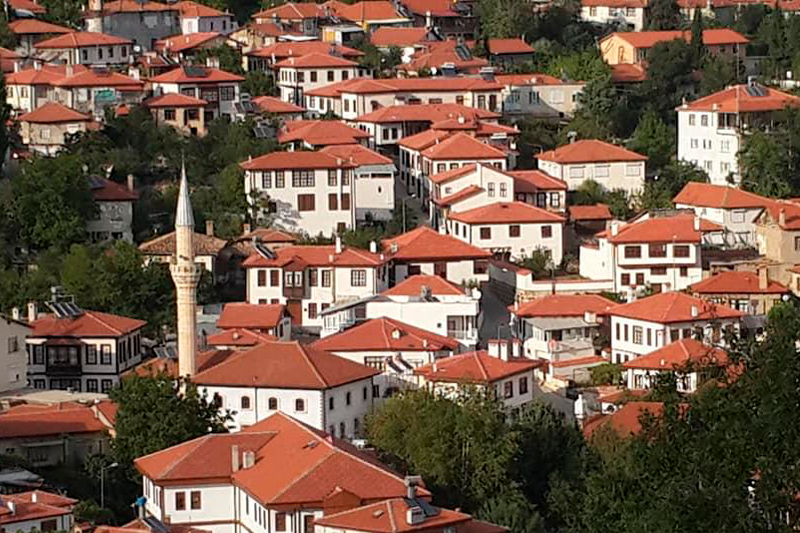 At the west of Antalya, located in the northern part of Finike, Elmalı has a large historical past in itself. The history of the region dates back to 3000-2000 BC. The district has hosted many civilizations throughout its long history. The mounds like Semayük and Müğren, Elmalı Museum where the ancient coins known as the Treasure of the century also have been exhibited, shows the reflections of history in a very beautiful way for enthusiasts. The streets of old Turkish houses of the district has a texture in the taste of Safranbolu. The highest point of the western Taurus Mountains Kızlar Sivrisi, Çığlıkara Forest with cedar trees some are older than 2000 years, Avlan Lake with its natural beauties, after drying in the 1970s, which revived with measures taken after 2001, are just a few of the reasons to add Elmalı to their trip routes. The tombs of Abdal Musa, Sinan-ı Ümmi, Vahib-i ümmi, also attracts visitors. There are many intellectuals and scientists from Elmalı in the history like Elmalılı Hamdi Yazır who interpreted Quran into Turkish for the first time. 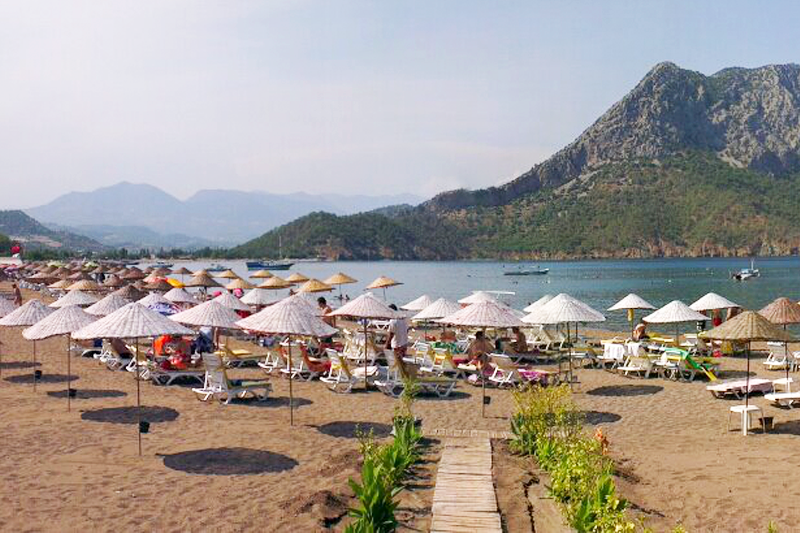 Located in the east of Phoenicia, the district of Kumluca Adrasan is one of the world's few holiday resorts with its untouched nature. With around 2 km of sandy beaches, clear sea and mountains covered with forest around the bay, Adrasan is the perfect route for those who want to get away from the city life. You can take part in water sports, underwater diving activities, and enjoy boat trips from the sea and the sun in the bays that are not accessible by road such as Suluada, Sazak and Cenova. You can take a rest in the coolness of the river located on the east side. 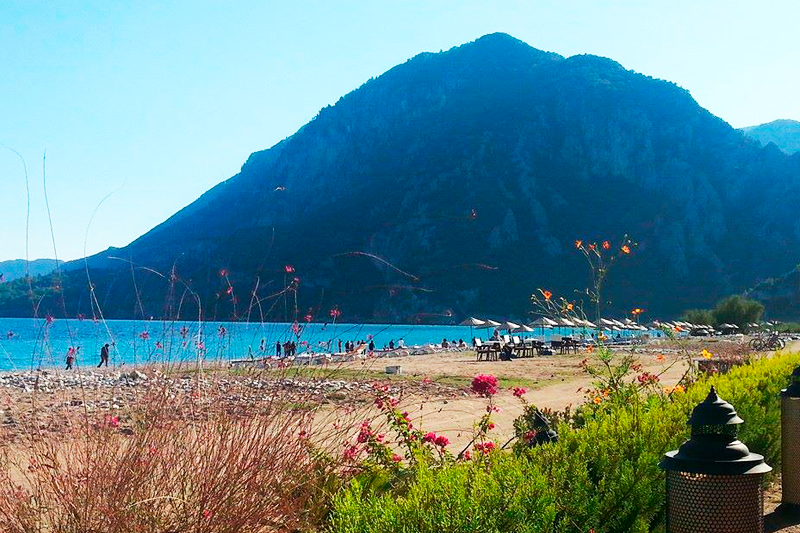 Çıralı Beach located in the east of Finike, is one of the breeding areas of sea turtles. The beach, lies between Olympos ancient city and Chimera Mountain. The whole area is a nature reserve and has a huge natural wealth. In addition to taking advantage of the sea and the sun, you can visit the ancient city of Olympos within walking distance, or sit around the flames in Chimera, which is accessible by crossing the path in the forest. It is rumored that in ancient Greek mythology, Bellerophontes killed the fire-breathing Chimera here. Due to methane gas leaking from underground, it is still said that this fire burning in summer and winter is the fire of Chimera. 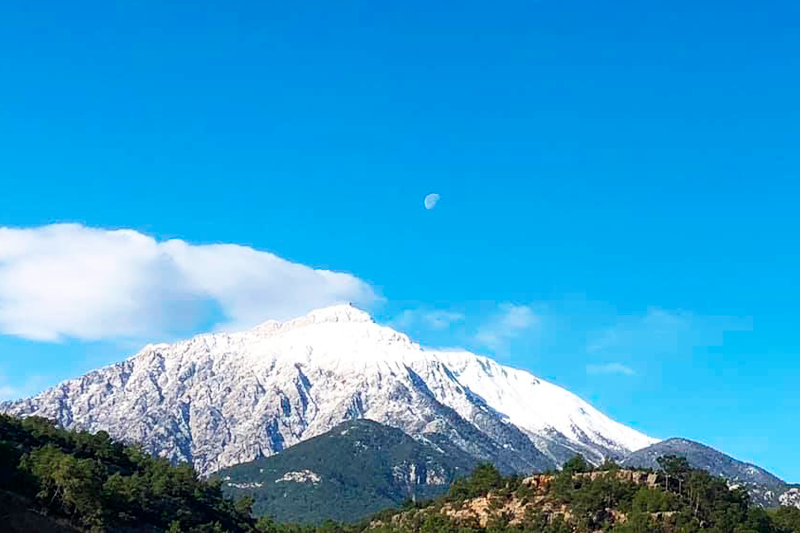 Tahtalı Mountain, a delightful route for hiking and climbing, is located in the National Park of Bey Mountains. The summit is 2365 meters high from the sea level and can be reached by cable car. The view is breathtaking with the whole panorama where sea meets forest. Paragliding is also another activity for adrenaline addicts. 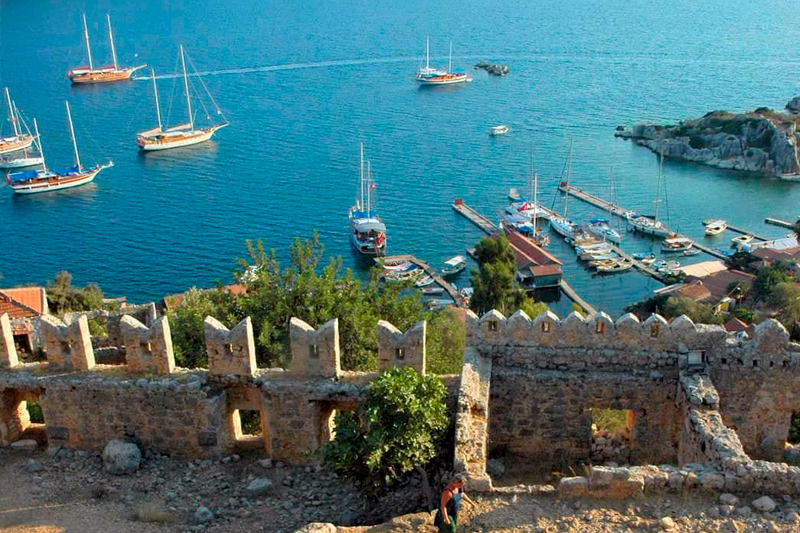 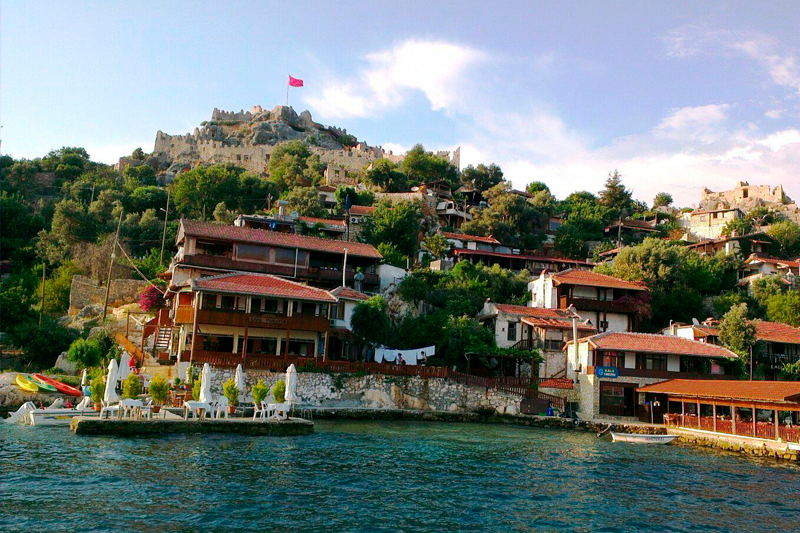 Kekova is an 4.5 km2 (2 sq2mi) uninhabited island facing the villages of Üçağız (ancient Teimioussa) and Kale Köy (ancient Simena). Archaeological and natural reserve areas around the island are called "Kekova Site". Therefore, the region has become known by the name of the island. In addition to its natural beauty, Simena the sunken city attracts visitors with its rarely seen ruins. The first entry point to the region, the Üçağız fishing village was known as Teimiussa, the safest port city to protect sailors from violent storms in ancient times. Now it hosts many ruins and is the starting point of boat trips. Kaleköy, which is located in the region has the smallest theatre of the Lycian region with a capacity of 210 spectators. Located just beside Kaleköy, the village of Hamidiye takes its name from Hamidiye battle cruiser anchored in the Hamidiye cove to hide from the enemy ships. Kekova also numerous swimming spots such as Salyangoz, Akvaryum, Tersane, Gökkaya, Burc Bay. Kekova is one of the few excursion routes of the world, not only Turkey, but with all these features. The region can be visited by either glass bottomed or normal boats, which usually start their trip from the village of Üçağız. Those who wish can also visit the area with boat tours leaving Demre. 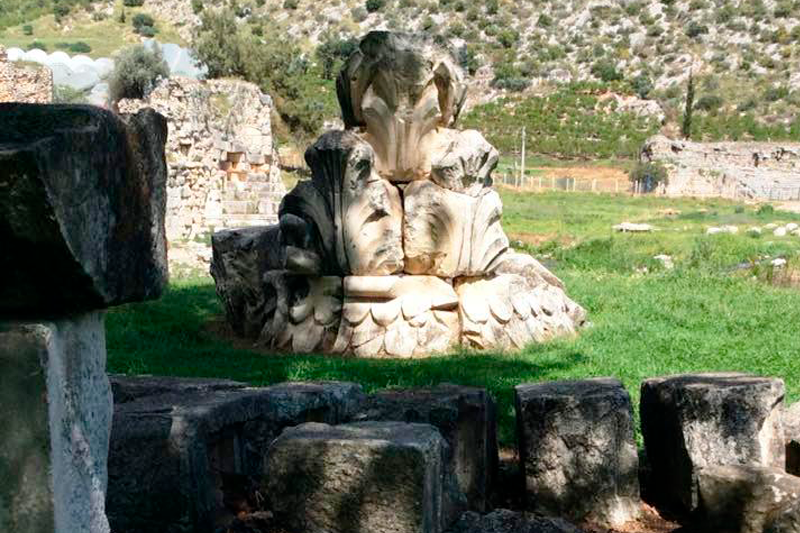 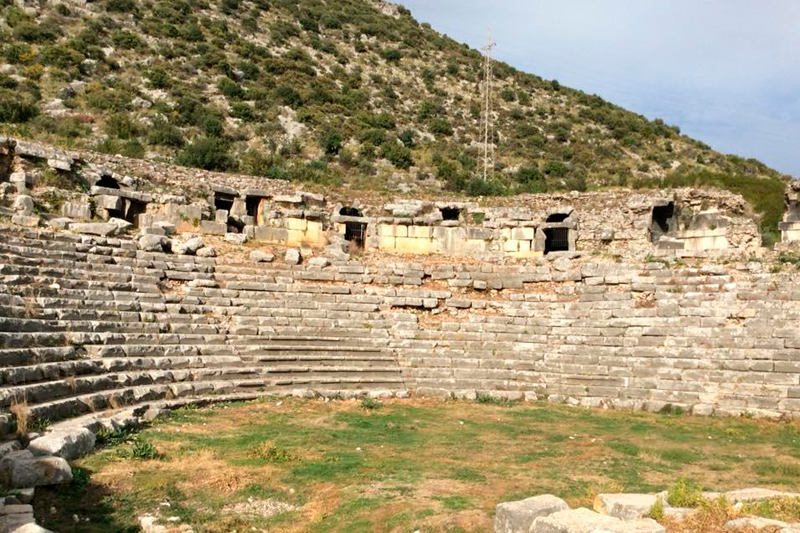 Limyra, the closest ancient city to Finike, is the Lycian town with more than 400 monumental tombs. Located at the foot of the Tocak mountain, the tomb of Perikle is one of the most important works of Lydian. The ancient Limyra settlement, known as Zemuri , was mentioned as Zumarri in Hittite sources . The sources of Limyros water emerge from the city settlement. The city theatre which some part of it is unfortunately covered by asphalt road, was built during the Hellenistic period. The theatre was rebuilt in Roman style with a capacity of 3700 people, with donations from the philanthropist Opramoas of Rhodiapolis, after suffering great damage from an earthquake. The Empty monument tomb (Kenotap) for Gaius Caesar, who died on the way back from the Syrian expedition, was made by artists sent from Rome during the period. The artifacts from the tomb can be seen in the Antalya Archaeological Museum. The diocese church, the diocese palace, the ruins of churches and chapels, are some of the remains to be seen while walking through the city of the Eastern Roman wall. 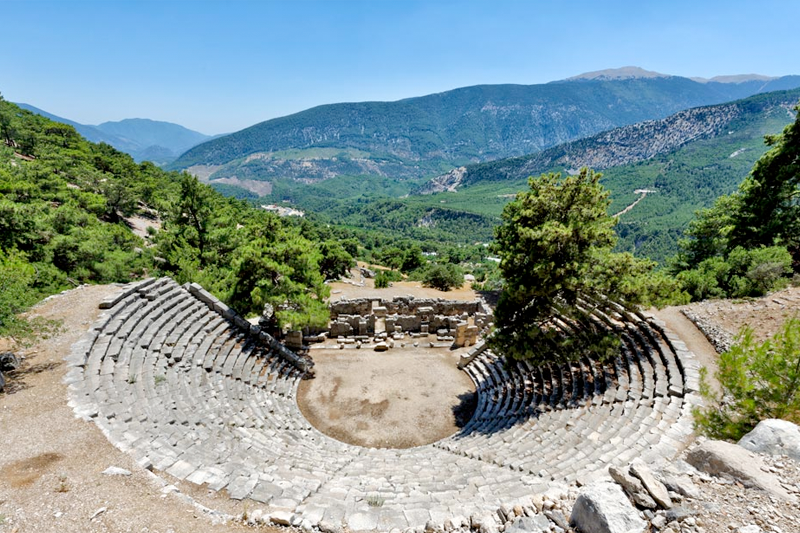 Arykanda is one of the cities of the Lycian period in the village of Arif, located On Finike – Elmalı road. This secreted city with at an elevation of 700 meters is surrounded by steep slopes, cliffs and forest. Due to the two stone axes found at the site of the ruins, it is estimated that the first settlements city dates back to late Kalkalitik and Early Bronze Age. Despite the fact that it covers a larger area than most 3 vote cities, Arykanda is a one-vote city of The Lycian Region. The name of the city is of Luwi origin and means "the place near the high cliff ". The most unique remnants of the city is is a Roman theatre for with a capacity of 2000 people. Arykanda was discovered by Charles Fellows in 1838 and excavated by Prof. Dr. Cevdet Bayburtluoğlu from 1971 to 2010. The historical ruins such as hillside houses, commercial agora, basilica, Cave Tombs, watchtower, State Agora, Helios Temple, Bath and Necropolis are amongst the places worth a visit. 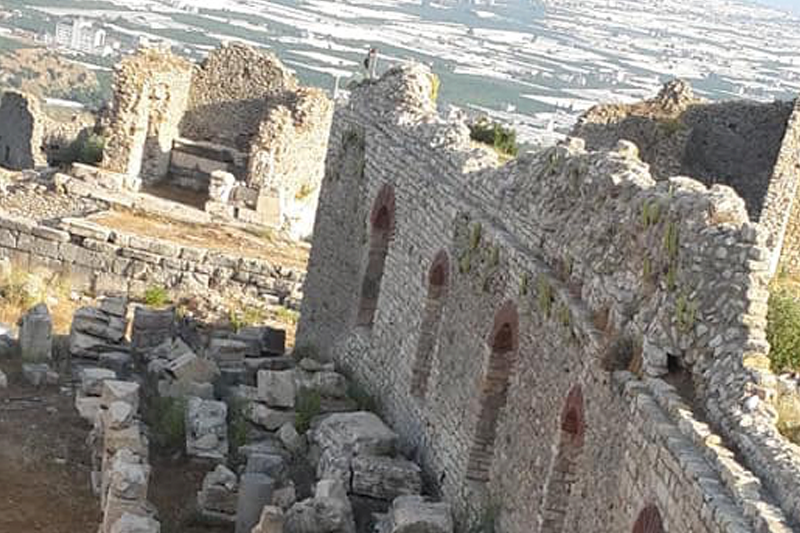 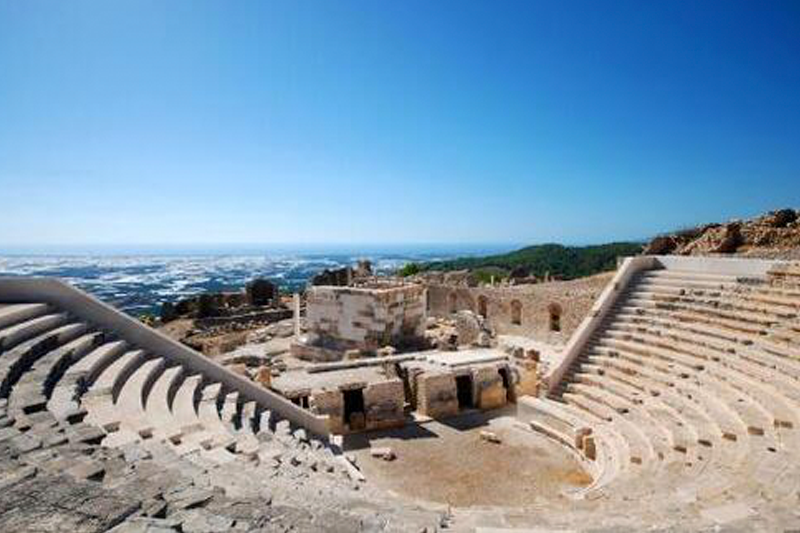 The ancient settlement located on the hill north of the village of Sarıcasu in Kumluca was established as a Rhodes Colony, dating back to the 8th century BC. Prof. Dr. Nevzat Çelik lead the excavation in 2006 with a team from the Mediterranean University. Opramoas, a well-known philanthropist citizen in both Lydian and Roman level, made generous donations to Lykian cities. The Greek inscription on this tomb is one of the longest of the era. Among the other notable ruins of the city; The Agora, the Bath, the church, the library, the cisterns and the Hellenistic period theatre with a capacity of 1500 people. 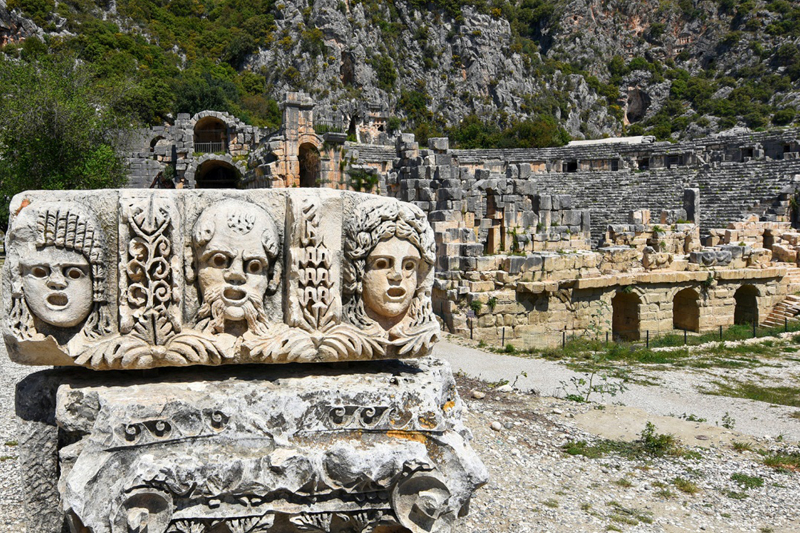 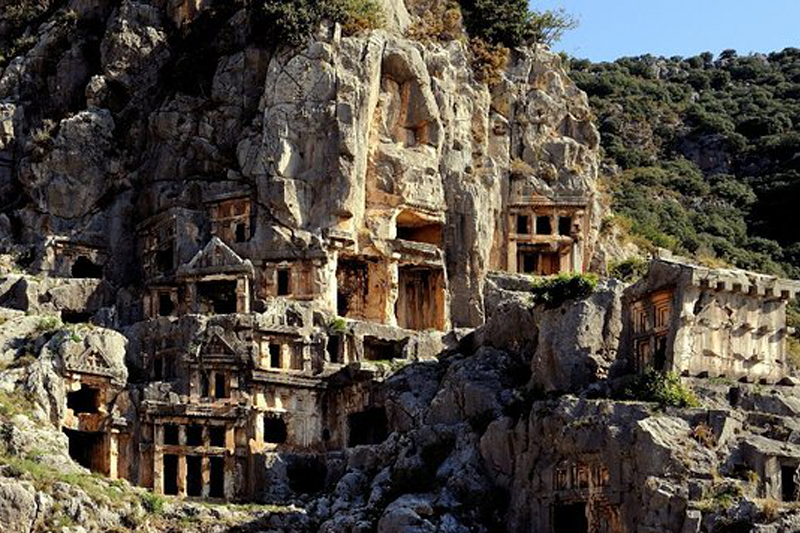 Located within the boundaries of Demre, Myra is one of the 6 cities of Lycian civilization with 3 votes. Myra played an important role in maritime trade through the port of Andriake. The tomb monuments, which are located in the center of the city and start above the theatre, have a distinct honeycomb-like layouts. Most of the monumental tombs are of house types and some of them have painted embossions. The largest Lycian theatre, with a capacity of 6500 people, was built against the rocks and survived to the present day. A chapel was uncovered in the western part of the theatre during the excavations. There are many defensive watchtowers present as around, as well as signs of olive oil extraction facilities. 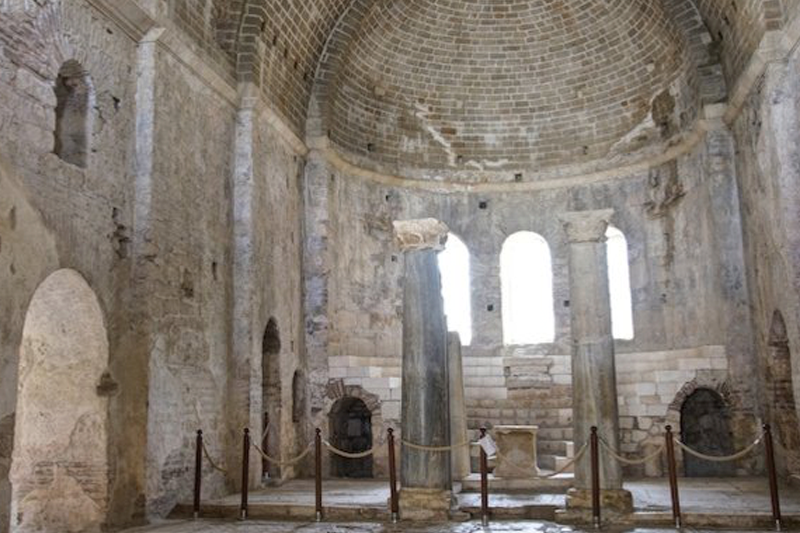 St. Nicholas, son of a wealthy merchant, known as Santa Claus in popular culture, was born in Patara in 300 A.D. He was buried in the church in Myra, which was named after him. In 1087, the bones were kidnapped by Baresi merchants and shippers, considering that they would be harmed during the Arab invasion. Saint Nicholas was believed to be the protector of children, sailors and unfairly imprisoned. The frescoes on the walls, church's floor mosaics and the bell tower make Church of St. Nicholas worth a visit. 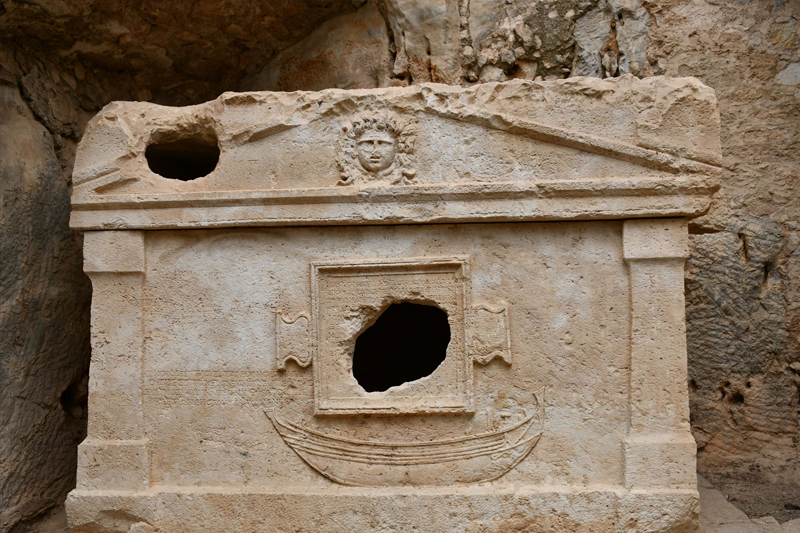 Olympos, the eastern Lycian City, is located within the National park, is discovered by 19th century explorers. According to the data obtained from ancient sources, the city was established in the Hellenistic period and concentrated on the northern side of the Acropolis. The temple, the church, the Alkestis tomb and the bath house are some of the important ruins in Olympos. One of the city's notable buildings is the harbor Basilica. The mosaic structure located in the north of the city and the figure of a female holding a snake at the mosaic of the abscissa are worth seeing. 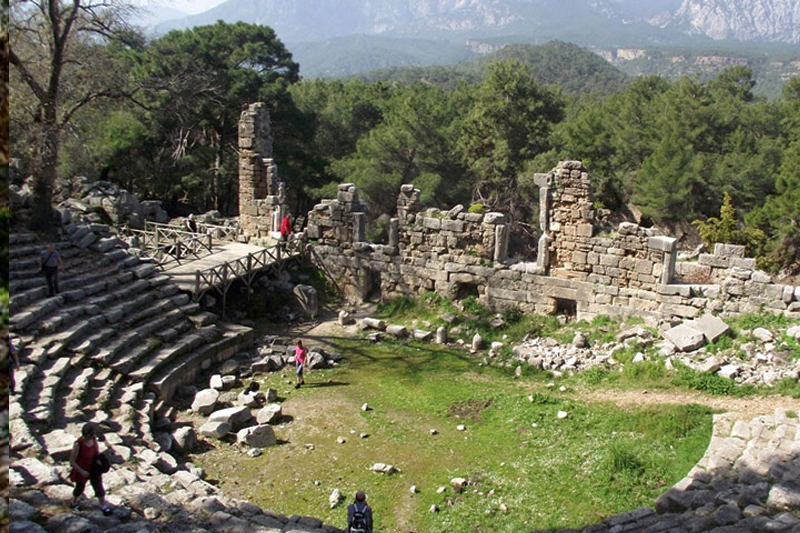 Phaselis, the last city of eastern Lycia, is on top of list for visitors with its unspoiled nature and ancient structures, being easily reachable. Surrounded by the magnificent Aqueducis, the south port is reached by crossing the Hadrian Gate. Phaselis was founded as a Rhodes colony, a city that was first a member of the Pamphylia before Lycian Union after. Phaselis, an important port city of maritime trade, has three ports. There is a temple in the Acropolis, which is surrounded by walls. The theatre building on the street combining two ports is on three floors. The 1700 spectator capacity theatre is known as the Roman structure due to the wall building technique used. Baths, general Toilets (laterina), cisterns are the structures that excavated and now open to visitors. Phaselis was severed from the Lycian Union for an unknown reason during 100 BC.

* Tours are available in weekdays only; the guests are required to confirm their preferences at least 15 days in advance.
* You can contact us for detailed information on different routes, additional requested tours and travel content.